The Four Stages of Visionary Leadership 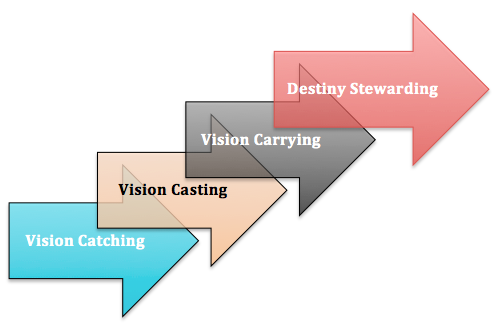 I have reflected over a decade on the question of how visionaries develop. These are some initial thoughts that I want to share with blog readers as I think out loud a bit. I would really appreciate your comments and input toward the development of these ideas.

Every visionary leaders starts by following someone else's vision. Here, the fundamental practice of following well precedes and develops the ability to lead well. During this time, a future visionary learns to submit to godly authority. In this stage the future visionary's style is shaped by the strengths and limitation of the lead visionary. Strengths provide a foundational modeling opportunity. Limitations and weakness forge convictions that will eventually shape the values of the future leader.

Eventually the visionary leader starts casting vision themselves. There are three nuances of how this vision relates to the the prior vision-catching content. In other words, most of early vision casting is found "underneath" the vision of a leader and/or organization of the developing visionary. The visionary casts vision: a) in support of, b) in relation to, and finally c) in contrast with.

At this pivotal place, the vision casting stage has matured to a point of full ownership, most often embodied by the senior position or lead role. Hence, not every visionary leaders reaches this point. And it is wrong, in my opinion, to expect that all visionary leaders should aspire to. (Or we would have not visionary second-chair leaders or visionary teams.)

The greatest experiential difference for the vision carrier is the increasing awareness that the vision came from God not himself. Over time, a greater convergence of spiritual maturity, life circumstances, and divine relationships unveil how little the vision truly emerged from within. Eventually he sees how God was orchestrating the events of life to the point that he knows that God himself gave him a vision to carry. Of course his practice of vision-casting hits full-bloom as the vision grows and expands from an ever-strengthening identity and awareness of God calling.

The final stage is one that fewer leaders reach because it is found only with unusual favor AND demonstrated success as a vision carrier over a long time. The success builds a platform of extraordinary influence beyond what was ever imagined. Hence, I believe this stage is experience by leaders in or after their fifties. The feeling of "carrying" a vision for a time, which is in itself a stewardship, moves to an even greater awareness of unplanned, yet God-ordained impact. For the best leaders, this enables them to guard a humble spirit and embrace a broader influence. For example the student pastor plants a church that becomes a church planting movement, or or transforms a city or adopts an unreached people group. At this stage, decades of vision carrying are seen from a different and more enlightened perspective.

At this stage it's easy for current names to come to mind like Rick Warren or Bill Hybels or T.D. Jakes or Mark Driscoll or Andy Stanley. But I believe there are thousands and thousands of leaders who reach this point, that we will never read about. Despite tremendous impact, they steward a more silent destiny.

So how do you react to this initial framing of these stages? Specifically how does this match up to your personal experience? What would you add or tweak or take away?  Thanks for considering a response.
Topics: Date: Dec 28, 2012 Tags: church leader / stages of leadership / vision casting / vision catching / visionary leadership