On Shortening Your Church Name - The Branding Story of Metropolitan Baptist

The name change series continues with this post. It covers another of the Five Strategic Reasons to Change Your Church's Name. The fourth reason to change your church's name is: When a name streamlines communication by shortening or modifying to reflect common usage.

Several years ago, my friends at Metropolitan Baptist Church in Houston, rebuilt their brand and tapped into what become a useful, and sticky name as “The MET.” Churches should be careful when making a change like this.  Here are two "do nots" of shortening.

DO NOT use initials for your church name.

Because some huge brands like IBM or UPS use initials, it doesn't mean you should. Your church's name is the foundation of a local brand. An organization or local ministry should not behave  like a nationally recognized product, retail or media brand. Just because its more efficient for those inside the church to communicate or type the initials, don't make the change. Using initials kills meaning and recognition on a local level.  This short-cut with few exceptions, will short-circuit awareness.

DO NOT leave doubt that you are a church when  you shorten your name.

It's easy to bake up something creative in a name that will not help your mission in the long run. An old rule of advertising applies here, "product center stage." That means you should say what you are. Authenticity matters. If you're church don't try to hide it. But some leaders do try to hide it trying to appeal to the unchurched. Or they just get too creative.

One church named the New Evangelistic Temple, rebranded to be "The Net." They did a fantastic job renovating a 1940's movie theatre and restoring it's vintage look. Despite its great reputation in the community, the church was vandalized the first several months it opened. Most people thought it was a new night club. After a while they put the word "church" back in their name.

Another story is a church planter who launched a church called "Our Place." No where in the name did it mention that the gathering was a church. After the launch they recognized the mistake and began to identify themselves as a church again. The lesson: Don't be so creative that people don't know you are a church. Once in a while a teaser strategy works. But this is a very rare exception.

One further note on excluding "church" from your name is that unchurched people do not prefer it. It smacks of "bait and switch" salesmanship or inauthenticity in the focus groups and surveys we have conducted.

How to Shorten Right

A classic story of good shortening is Federal Express. This innovative company brought overnight delivery to the world. As the brand sustained its ubiquity, people began shortening the name in common usage to "Fed-ex." Why does this happen? Humans gravitate to using less syllables in communication.  So the company responded by reflecting common usage in the brand. Another example is Kentucky Fried Chicken. Two days ago I drove past the KFC Yum Center in Louisville, the home of the KFC brand. When you see KFC you know what it means. Again the brand is well known enough that it can make this leap.  Keep in mind that wherever you see the KFC initials you see the face of Colonel Sanders, which is a strong reinforcement to the initials.

The Story of Metropolitan Baptist

Years ago, Metropolitan Baptist reached out to Auxano to guide them through the vision pathway  and to complete a comprehensive rebranding process. The journey led to a strategic shortening of their name in their logo. Why was it a good move for The MET? First, the common usage of the church culture had gravitated toward calling the church "The MET" for years. It is both an attractive and descriptive shortening in addition to being a more efficient solution. For example, the "The MET" is more descriptive and closer to the 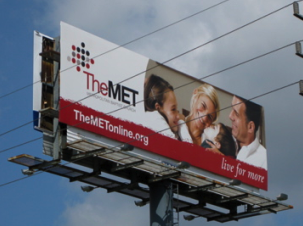 actual name than "The Net" in our previous illustration.  Second, we believed that the shortening could build stronger awareness with the external audience as the church launched a multisite strategy. This second reason hinged on a logo execution that included the full name of the church (as you can see here). So we steered away from being too creative, yet delivered a bold, distinct brand that visually reflected the vision of the church.

Check out a visual overview of The MET's brand by Auxano.